LED components, or individual LEDs, are very widely used by electronic hobbyists and engineers in circuits. We are NOT talking about LED bulbs or complete LED products. 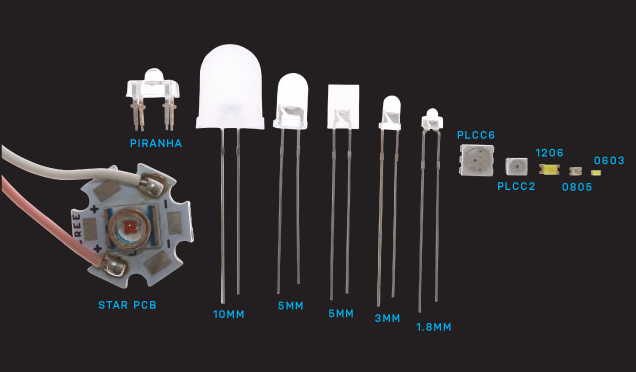 There are two main types of LEDs: General and High Power.

General LEDs are low power, and are common in 3mm, 5mm and surface mount (SMD) packages. These standard LEDs are generally lower in efficiency and can only handle a small current, such as up to 30mA (0.03A). Other packages can include 1.8mm, 10mm, rectangular, UFO, piranha and SMD packages such as 0603, 0805, 1206 and PLCC.

High Power LEDs are the ones you find in LED bulbs and large LED lighting products such as our household and commercial ranges. They are almost always a surface mount device (SMD) package, but are large high power LEDs that require heatsinking. If you want to see one, an example is our CREE XR-E LEDs.

CREE is a manufacturer of LEDs, and is one of the field’s leaders. This is why people like to purchase CREE products. When someone talks about a CREE torch, they are talking about a torch made using an LED from CREE. Other major manufacturers are Edison, Samsung, LG, and Philips.

There are two main aspects to be aware of when using LEDs:

A single LED: If you want to run a single LED, the power source voltage (Vs) must be higher than the LED Vf, and the remaining voltage must be dropped across a current limiting resistor. The resistor voltage will be equal to Vs minus Vf. You can then calculate the resistor value using Ohms Law below.

LEDs in series: If you want to run more than one LED, you can wire them in series, which means connecting the anode of one to the cathode of the other. Note that the individual LED voltages (Vf) are added together.

Once you know the remaining voltage that will be left over the resistor, you can calculate the value of the resistor using Ohms Law. The Ohms Law triangle is shown to the below, where V = Voltage (Volts), I = Current (Amps) and R = Resistance (Ohms). For example, to calculate the resistance for a voltage of 2V and a current of 25mA, the formula will be R = V / I = 2 / 0.025 = 80 Ohms. You would use a value of 82 Ohms as this is a common value. 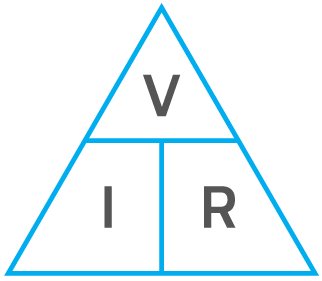